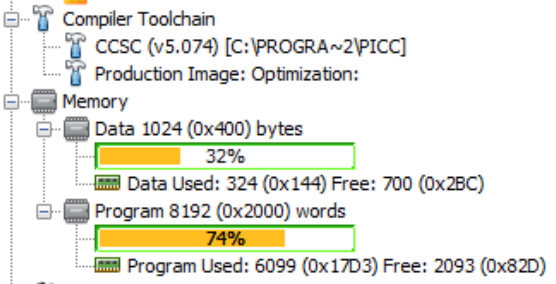 It took a few hours of work to plough through the code and make all the necessary changes required to convert from CCS to XC8.  So now the moment of truth, let’s see the Memory usage when using the free version of the XC8 compiler:

Oh.  It appears that the free version of the XC8 compiler is creating more efficient code than the paid-for CCS compiler!  Ignore the references to the PRO licence above – it was compiled in Free mode.

I then thought that although the CCS code takes up more space, perhaps it’s compiled for speed rather than space?  To cut a long story short – no, it isn’t.  The free XC8 compiled code took 26329 clock cycles to configure CatTrack and run an encryption routine, whereas the CCS compiled code took 31849.

Out of curiosity, I wondered how small the PRO version of the XC8 compiler could make the code.  This is the answer:

Fairly remarkable!  The PRO (paid-for) version of the XC8 compiler is creating code that consumes 63% less ROM and 15% less RAM than the paid-for version of CCS.

This prompted me to come up with a project specifically to compare the two compilers, so that’s what I’ve done.  I’ve stuck it in git, here:

It’s designed to be opened in MPLAB X and is full of #defines, so it’ll compile fine using either CCS or XC8.  The code sets up some IO, encrypts 128 bits using XXTEA then prints the encrypted result out of the UART.

Results are as follows:

I think the results probably speak for themselves.

I wondered if this was limited to the 16F range of PIC devices, but it’s not.  I converted one of my other projects which uses an 18F PIC.  Migrating from CCS to the free XC8 compiler resulted in the ROM usage reducing from 22420 words to 20457 words.

So there you have it!  I dismissed the free version of the XC8 compiler, but you really shouldn’t.