Open it up and you can see the li-ion battery (see Choosing a Power Source) connected to the back of the PCB with the PIC alongside it.  The two LEDs are in the top left, although in order to save power they’re disabled in software, save for flashing once on power-up.  You can see the light purple coloured area on the right of the PCB where the copper has been etched away for the antenna on the reverse.  The battery sits on top of the ground plane just under this area. 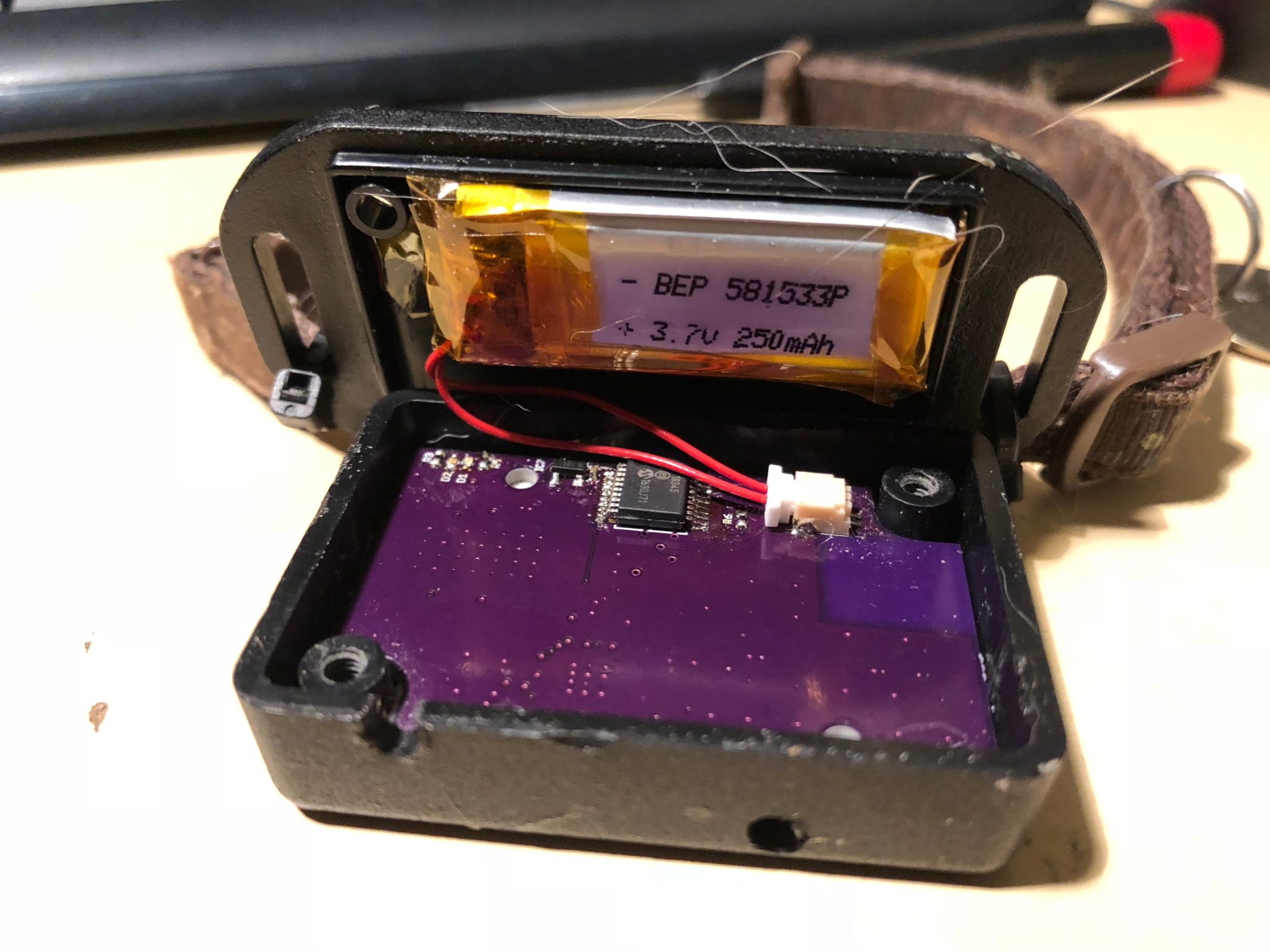 Flip it over and we can see the front of the PCB.  The soldering looks a little shoddy, but bear in mind all of the small components are 1.0 x 0.5 mm and have been soldered by me by hand on the dining room table!  The white sticky pads are used to hold the PCB off the bottom slightly such that the GPS antenna (the thing with OriginGPS written on) doesn’t contact the plastic. 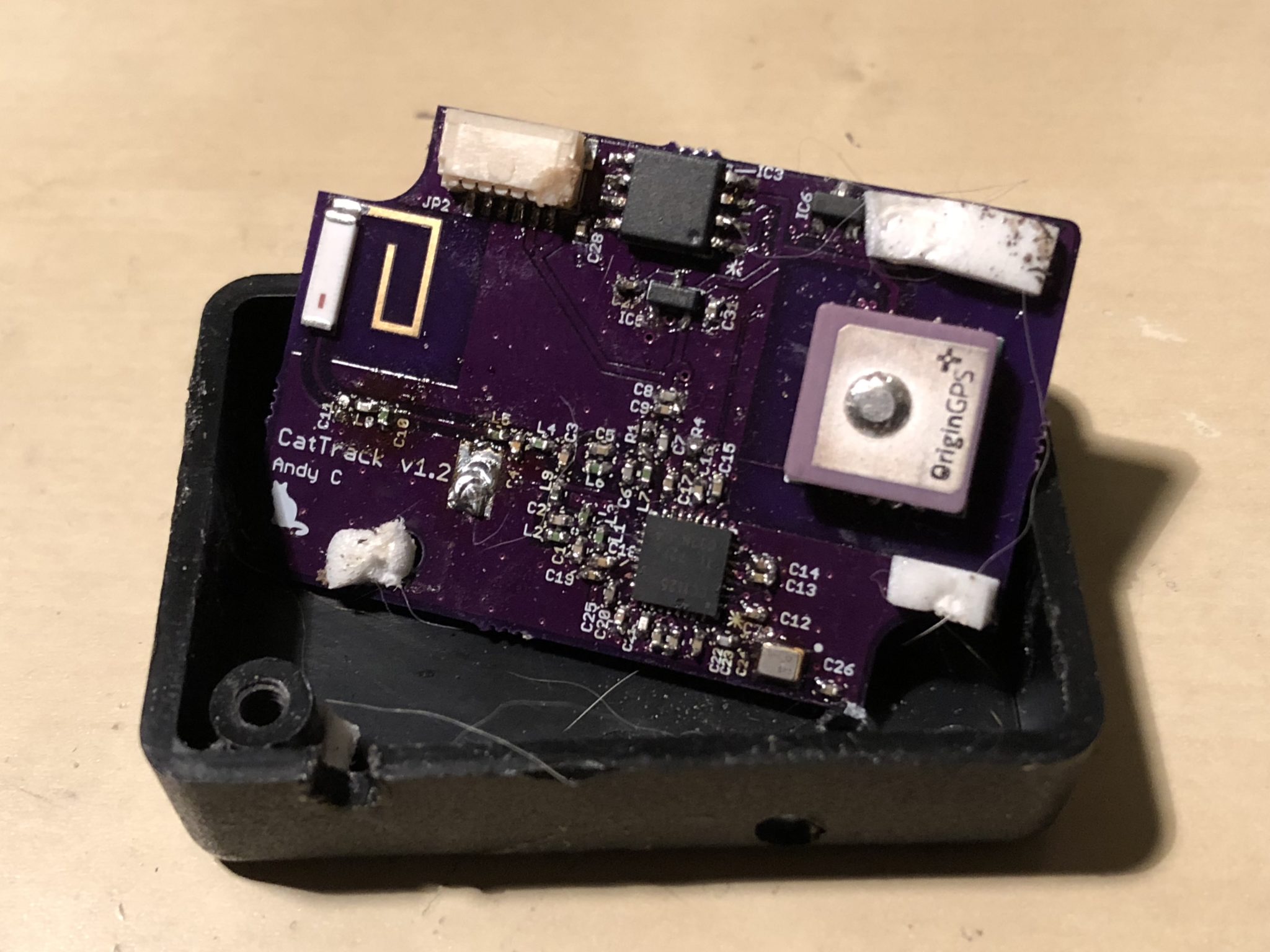 In order to allow me to communicate with CatTrack ahead of designing the basestation unit, I’m using a CC1125 development board. This allows me to transmit and receive arbitrary packets to/from CatTrack directly from my PC, simulating the basestation.  Annoyingly TI’s software doesn’t seem to support macOS, so I’ve fired up my Windows machine. 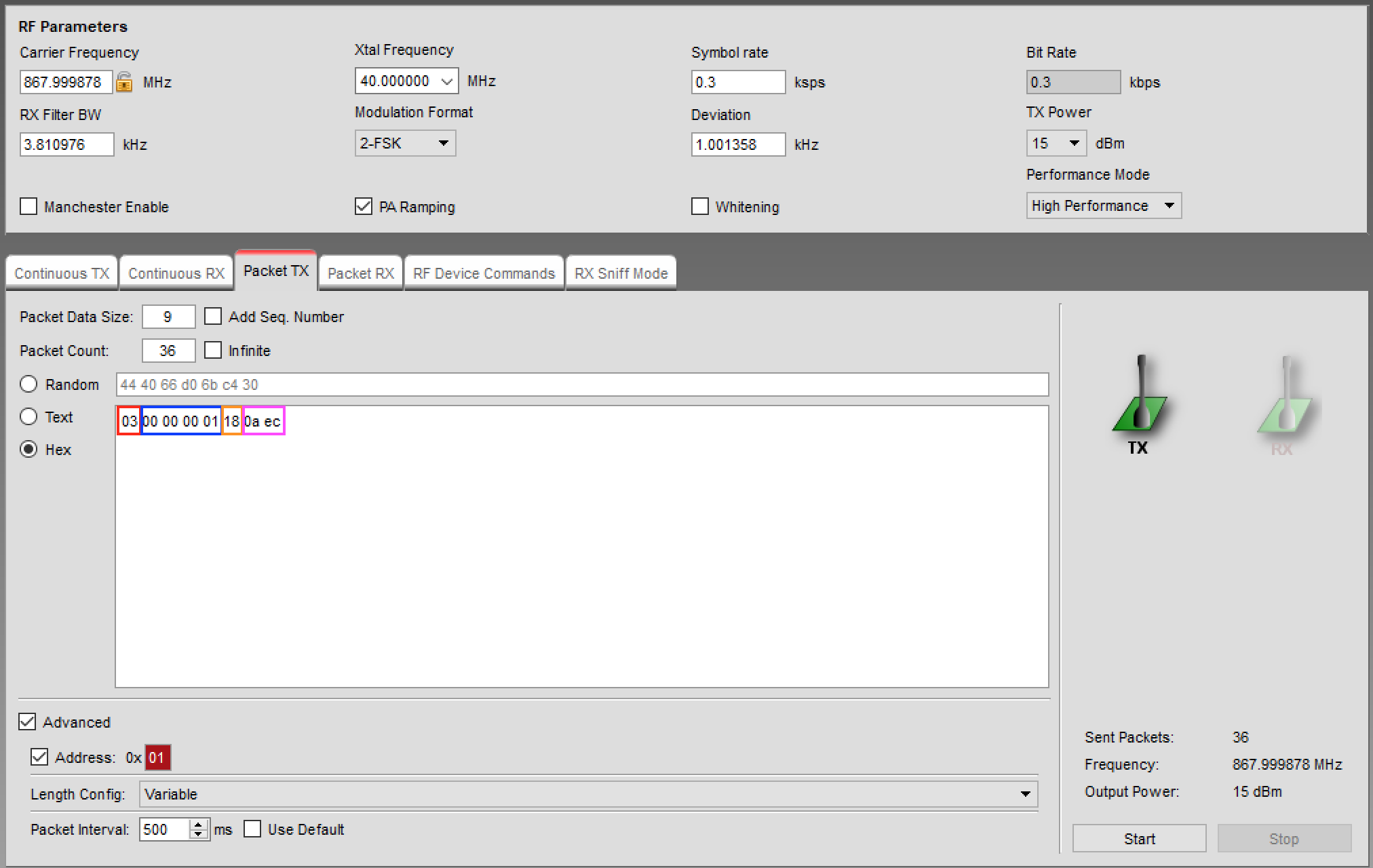 Zooming into the radio packets I am transmitting, we can see the following: 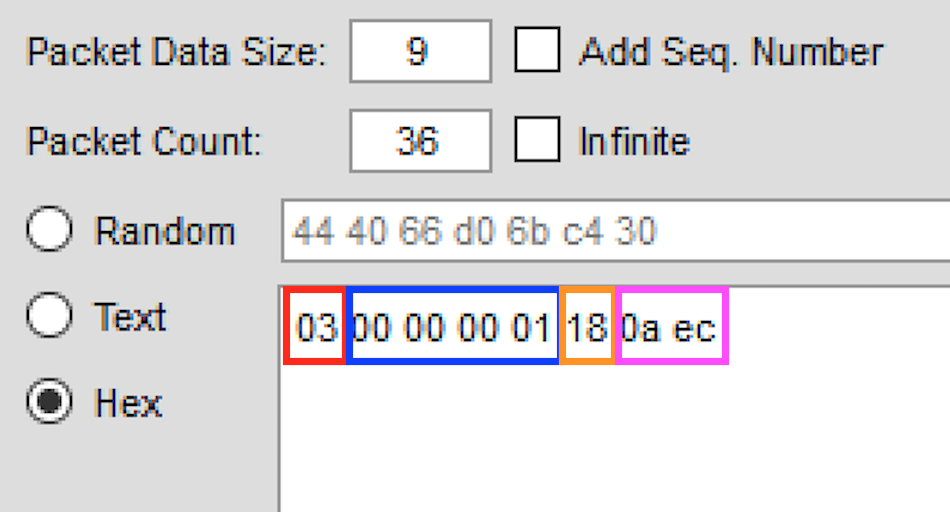 They are broken down thus:

Clearly the encryption isn’t yet turned on – I’ve commented that out in the code too.  It’ll be too difficult to use the encryption from a development board.  I’ll switch it on once I’ve designed the basestation.

CatTrack sits in its low-power sleep mode most of the time, waking the receiver up once every 16 seconds.  Therefore in the worst-case scenario, I’ll need to send 32 messages – one every 500ms in order to ensure that CatTrack receives a message when it wakes up. 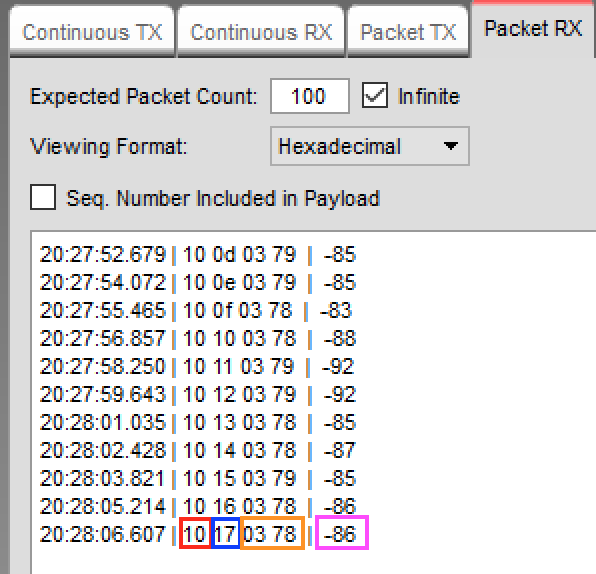 Now that we know we have plenty of bttery life left, let’s send a ‘GPS position request’ and see what comes back.  The message to be sent from the basestation to CatTrack is exactly the same as the 0x03 beacon request above, but 0x03 is replaced with 0x01.

At first, this is what the collar sends us back:

All of the zeros in the middle is the position information.  We’ve not yet got a GPS lock so they’re all zero.  We wait a few minutes, and then…

We’ve found Buttons!!! (I’ve blanked off the last 24 bits of each latitude and longitude)

I’m really happy with how CatTrack is performing.  Currently it looks like I’m going to have many months of battery life as the Li-Ion battery has only dropped from 4.2 V to 3.8 V in around 6 weeks.

Now I need to ditch the CC1125 development board and get on with making the basestation!  That way I’ll be able to turn on the encryption and RF replay protection.  I’ve quite a few ideas on how to implement the basestation too which I’ll share in a future post.

I’ll do some tests to see what kind of range I’m getting too.

I need to make sure I keep the momentum up. Now that CatTrack is working (albeit with a development board as the basestation), it’s tempting to take my foot off the gas, but I don’t want to do that, I want a full solution, including the basestation!